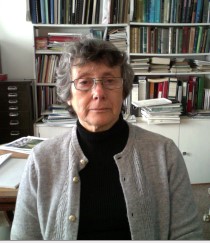 Jill Urban, PhD is a Senior Research fellow Emeritus in the Department of Physiology, Anatomy and Genetics Oxford University. She studied chemical engineering in South Africa and carried out her PhD research on ‘fluid and solute transport in the intervertebral disc’ under Alice Maroudas at Imperial College London. Her research has continued to focus on the physiology of cartilaginous tissues, particularly the intervertebral disc.  She has a major interest in how the macromolecular composition of the matrix, mechanical loading and nutrient supply all regulate the extracellular physicochemical environment of the different regions of the disc and hence influence cellular metabolism and matrix turnover.  Professor Jeremy Fairbank, her long-standing collaborator, has placed the basic studies in a clinical context and has supplied waste surgical tissue for numerous studies. She has published over 100 peer reviewed papers and 30 chapters on disc and cartilage physiology, won several international prizes including a Volvo and two ISSLS prizes, and has co-ordinated two EU programmes involving centres in 7 EU countries, on clinical and basic science aspects of disc degeneration.

About the PSRS Lifetime Research Award

The Lifetime Research Achievement Award was created in 2013 by the Philadelphia Spine Research Society (PSRS) to honor an investigator who has established him/herself with sustained and long-lasting contributions in the area of spine research. The award is given biannually when the Society holds its International Research Symposium in Philadelphia. The first recipient of this award was Professor Irving Shapiro, the Anthony and Gertrude DePalma Professor of Orthopaedic Surgery and Director of Orthopaedic Research at Thomas Jefferson University. The award continues today with a generous sponsorship by the Shapiro Family Trust.

The PSRS, founded in 2004, was set up to bring together members of the Greater Philadelphia community of basic scientists, bioengineers and spine surgeons concerned with studies of the intervertebral disc and the associated spinal tissues. Over the last decade, the PSRS has broadened its reach to include a truly global community of researchers interested in the intervertebral disc and spine.