David Burr, PhD acted as the Director of the Musculoskeletal Biology Workshop from 2004 to 2017. This year, he will present a plenary session as the recipient of the Remodeling in Bone (RIB) Award. 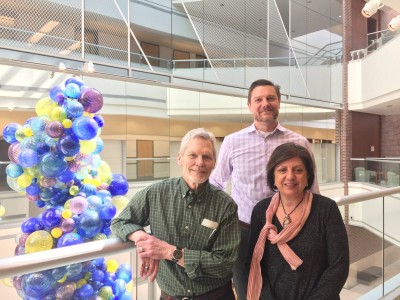 Please state your research interest.
My primary area of research emphasis is to evaluate the effects of pharmacologic agents used to treat osteoporosis on bone matrix quality, specifically, the accumulation and repair of microdamage, changes in mineralization and alterations to the collagenous matrix. We have been investigating matrix effects of bisphosphonates and other anti-remodeling (and anabolic) agents for many years using large animal models (rabbits, dogs, primates). We have also recently been interested in how to reduce skeletal fragility by changing matrix physical properties without altering cell behavior – cell independent treatments for osteoporosis. Since the early 1980’s, I have studied the cross-talk between subchondral bone and cartilage deterioration, and still am frequently asked to talk about this in national and international venues. In the past several years, we have begun to investigate changes in matrix in Type 2 diabetes in the ZDSD and ZDF rat models of diabetes.​

How long have you been involved with this workshop?
I first attended the Sun Valley Workshop in 1983.  At that time, there were only about 65 attendees, but they were some of the most prominent names in skeletal biology at that time.  In the early 1990’s, Charles Turner and I began to organize some of the sessions for the Workshop, especially those that involved biomechanics. This was at the time when Harold Frost was proposing his mechanostat, and he was very interested in the intersection of mechanics and skeletal response.  In 2004, the long-time Director (since 1965) and founder of the Workshop, Web Jee, decided to step down as Director and ask if I would take this spot. I was the Director of the Workshop from 2004 through 2017. This year, the directorship has transitioned to new co-organizers, Drs. Teresita Bellido and Alex Robling.

What makes this workshop unique?
This is truly a workshop, not simply a forum for the presentation of new data. There is an attempt not only to define the problems, but to find a pathway for a solution to the problem. Thus, we begin with the question:  “What is the problem?” followed closely by “What do we need to know to solve the problem?”  Discussion revolves around “What additional information do we need to solve this problem?” and “What experiments need to be done to generate this information?” The Workshop is a “think tank,” with a goal of addressing and eventually solving problems.

The workshop involves a small group of junior and senior scientists, usually 85-100, which allows for productive discussion and the opportunity for junior scientists to “rub elbows” with more senior scientists. Time is set aside each day to allow informal exchanges among the participants. This is effectively achieved by sessions taking place in the mornings and evenings only, with afternoons free. Several social and scientific/career development events are organized to promote the interaction of junior and senior investigators.

In addition, the Workshop is perhaps more interdisciplinary than any other meeting or workshop. Participants often include one or more anatomists, anthropologists, biomechanicians and biomedical engineers, biochemists, cell biologists, dentists and maxillofacial surgeons, endocrinologists, geneticists, gerontologists, internists, mathematicians, molecular biologists, orthopaedic surgeons, pathologists, pediatricians, pharmacologists, physicists, rheumatologists and sports medicine experts. They usually include one or more people involved in human, dental and veterinary medicine and research. All Workshops have had active participation from representatives of the pharmaceutical industry, as well as both clinical and basic science university faculty. All of these groups benefit in different ways.

What is your fondest memory of attending this workshop?
There are many fond memories, both social and professional. Too many to mention.  I recall in the “early days” many spirited discussions after the evening session (when I was younger and could stay up that late) in the bar with investigators who at that time were junior investigators, and subsequently became well known leaders in the field.  I also recall at my first Workshop in 1983, watching the ice show from the window of my 2nd floor Lodge bedroom. From a more professional standpoint, I recall Harold Frost pacing back and forth at the back of the room like a shark, with his pipe, and every so often telling the speaker (in sometime very sharp language) that they didn’t know what they were talking about.  That was scary at the time, but an interesting memory in retrospect.  The attendees are a bit more gentle these days, but just as incisive.

What do you look forward to most about attending this year’s workshop?
The discussions. These are open, frank and free ranging.  The goal is be provocative, and also to try to solve problems, not just discuss them.  These discussions are fun because they are unstructured, and no one’s ideas are dismissed.

How has the workshop impacted your career?
Many ideas that are currently “mainstream” were actually developed and first discussed at the Sun Valley Workshop. The most important to me was at the 1991 meeting at which there was discussion about microdamage repair and what would happen to bone if it were suppressed. We decided to find out by giving high doses of bisphosphonates to suppress remodeling as much as we could at that time (the BPs were not as potent as some are now), and to determine whether this caused accumulation of unrepaired microdamage (it does). We discovered that suppression of bone remodeling over a long period of time can be associated with reduced bone toughness, meaning that it had a negative effect on the bone tissue properties. Of course, 10 years or so after we began this work, patients began to present with atypical femoral fractures, the result of some of the effects of long-term remodeling suppression that we noticed in animal studies.

Beyond this specific instance, the Workshop provided networking opportunities to me as a junior investigator. Getting to know people like Harold Frost, Web Jee, Bob Recker, Michael Parfitt, Hideaki Takahashi, and George Jaworski – or listening to Marshall Urist talk about his work on BMPs – was both instructive and valuable to me.  These investigators became colleagues with whom I could share ideas and receive honest feedback (such as the time that Mike Parfitt told us we did an experiment completely wrong – and he was exactly right, so we went back and did the experiment the correct way, not so easy or inexpensive when using a large animal model like dogs).  This is partly the reason that the Workshop now focuses so much on career development, and why we make every effort to engage junior investigators with the more senior scientists.